Located in Plattsburgh, N.Y., Saranac Power is an independent 160 MWe facility that generates power for sale to the grid via two gas turbines equipped with heat recovery steam generators (HRSGs). Low-pressure steam exiting the steam generators is passed through an air-cooled condenser, returning the condensate back to the boiler to complete the cycle

The GEA condenser is an efficient system featuring a 25-bay design arranged in a five-row "A-Frame" configuration. Finned tube bundles connect the upper steam duct to the lower condensate headers. Four of the five cells in each row are parallel (K) flow-tube bundles. The fifth cell is arranged as counter-flow (D) tube bundles for air ejector piping for removing non-condensable gases.

Comprised of 35-foot-long vertical finned tubes, the air-cooled condenser sits on top of the power plant. It looks much like a five-gable house roof, each two-sided gable running 173 feet lengthwise. Beneath the 48,500-square-foot cooling surface sit five fans drawing cool air up from below and forcing it around the finned tubes to convert steam back into water.

Environmental pollution ranging from industrial soot to leaves to bird feathers and droppings can adversely affect the airflow around the tubes, reducing the unit's efficiency. At Saranac Power, the enemy takes the form of pollen from the many cottonwood trees indigenous to the area.

The fruit of the female cottonwood matures in the late spring and produces seeds contained in cottony masses that collect on the condenser's finned tubes, reducing airflow around them and adversely affecting the unit's efficiency by increasing steam turbine backpressure. This can result in lower unit output and higher net plant heat rate.

At first, the facility addressed the problem by contracting with an engineering firm to design and fabricate an in-house cleaning system. However, the apparatus proved cumbersome to use, especially when relocating it from one bay to the next. Other methods, such as the use of fire hoses, hand lances and chemicals, were dismissed due to the possible fin damage and environmental cleanup concerns. The facility turned to Conco Systems for assistance.

Utilizing purpose built technology from JNW CleaningSolutions GMBH of Germany, Conco's FinTech ACC™ cleaning service has been used on air-cooled heat exchangers in power, petrochemical and process industry plants worldwide. It uses high-volume, high-pressure water to clean the tube bundles. Air-cooled exchangers have different configurations according to manufacturers' designs and cooling requirements and Conco's equipment can adapt to different configurations by changing the angle at which the water hits the tube bundle. Plain water, usually from the power plant's own fire water system, is used, eliminating environmental concerns. A portable pump that is part of the system generates up to 1,800 psi water pressure.

All equipment arrived at Saranac Power on its own trailer, along with the work crew. Once set up and in action, the assembly moved up and down at a constant speed and fixed height relative to the tubes as it traveled the 173-foot length of the first "gabled" ACC unit at Saranac Power. It was then moved to the next unit and so on until all were clean. 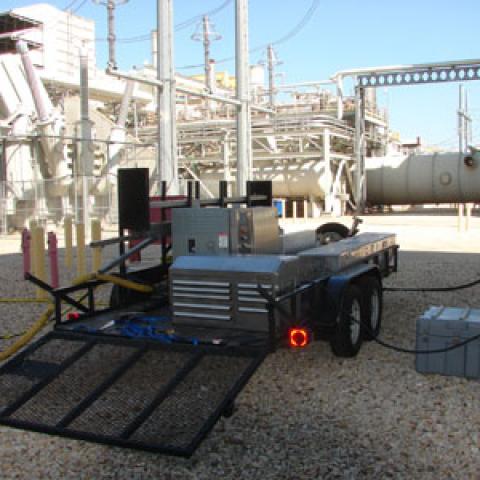 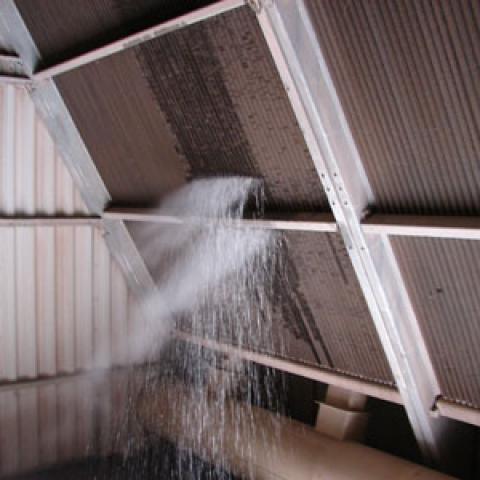 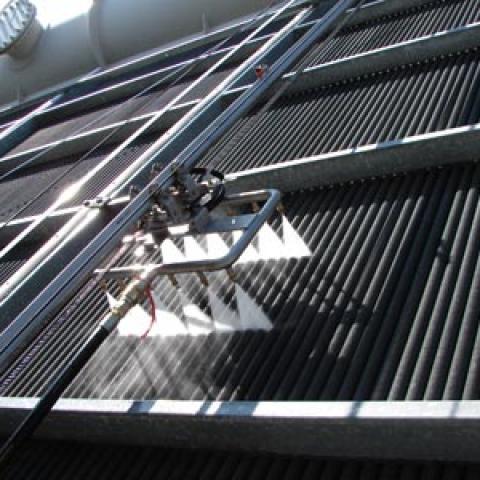 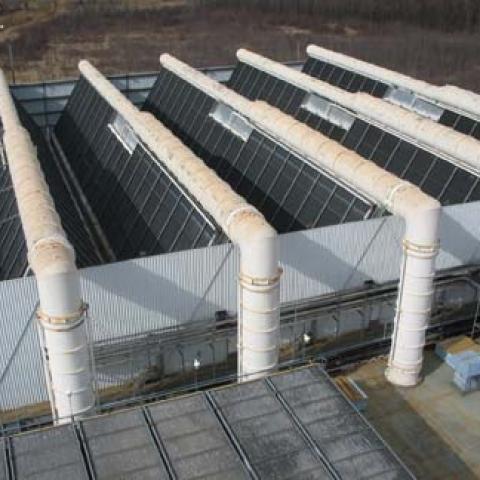